The IIT Gandhinagar is proud to host the Indira Foundation Distinguished Lecture series aimed to present the latest researches in various disciplines to a wider audience. The lectures will be organised every year at IIT Gandhinagar with an aim to bring together distinguished scholars of international repute to present their findings. The topics will be covering a wide range of disciplines.

The lecture series has been constituted at IIT Gandhinagar by a well-wisher Avinash Manudhane in memory of his mother.

Indira Foundation Distinguished Lecture Series was instituted at IIT Gandhinagar by a well-wisher of the Institute, Mr. Avinash Manudhane in memory of his mother. The lecture is to be held annually in the area of interest addressing wider audience on topics transcending several disciplines and latest researches.

Mr. Avinash Manudhane did his B. Tech in Chemical Engineering from IIT Bombay in 1975 and M.S. from Syracuse University, New York in 1977 and MBA with distinction from Northwestern University, Chicago in 1981. He joined Goldman Sachs in 1987, reaching to the position of Vice President in 1989 and Managing Director in 1996. He was elected as a Partner of the firm in 1998.

Rajmohan Gandhi is Distinguished Scholar-in-Residence at IIT Gandhinagar and a Research Professor at the Center for South Asian and Middle Eastern Studies, University of Illinois at Urbana-Champaign, USA. He is a biographer and grandson of Mahatma Gandhi.

Rajmohan Gandhi is Distinguished Scholar-in-Residence at IIT Gandhinagar and a Research Professor at the Center for South Asian and Middle Eastern Studies, University of Illinois at Urbana-Champaign, USA. He is a biographer and grandson of Mahatma Gandhi.

Scientific and Technological Contributions of the Indus Civilization: Their relevance for the present

Jonathan Mark Kenoyer, Professor in Anthropology, has been teaching archaeology and ancient technology at the University of Wisconsin, Madison since 1985. He has served as Field Director and Co-Director of the Harappa Archaeological Research Project since 1986. He has worked on excavations and ethnoarchaeological studies in both Pakistan and India, as well as in other adjacent regions such as Oman and in China. He has a special interest in ancient technologies and crafts, socio-economic and political organization as well as religion. These interests have led him to study a broad range of cultural periods in South Asia as well as other regions of the world, including China, Japan, Korea, Oman, and West Asia in general. His work has been featured in the National Geographic Magazine and Scientific American and on www.harappa.com.

This lecture will focus on some of the major scientific and technological contributions revealed through recent studies of the sites and artifacts of the Indus Civilization. The topics will include Indus settlement systems and the location of key settlements in locations that allow optimal use of natural resources. It will also discuss the nature of Indus architecture and its adaptation to local climate conditions and population issues in walled settlements. Other topics will include aspects of technology such as the use of refractory clays in construction of cooking vessels and crucibles, the firing and glazing of steatite, special designs of drills for perforating hard stone, and the development of textile production using spinning wheels. Many of the contributions of the Indus set the foundation for later technologies in subsequent periods and the principles of these technologies still have relevance today. 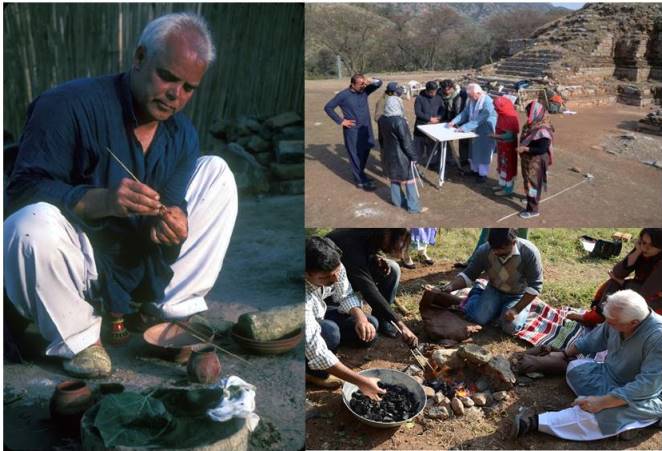 To view the video of the lecture click here