Dr. Sudhir Jain is an active academic in the field of earthquake engineering and a passionate academic administrator. He is presently the Vice Chancellor of Banaras Hindu University. He was a faculty of IIT Kanpur (IITK) in the Department of Civil Engineering from 1985 to 2019. He was the director of IIT Gandhinagar between June 2009 - June 2019 and September 2019 - January 2022.

Dr Jain is an internationally reputed scholar of earthquake engineering and a visionary academic administrator. He was conferred the Padma Shri, one of India’s highest civilian honour, for distinguished service in the fields of science and engineering, by the Government of India in 2020. He was elected as international member of the US National Academy of Engineering in 2021 (one of the only 18 elected from India) and received the Distinguished Alumnus Award from Indian Institute of Technology Roorkee for Academic or Research Excellence in 2018.

Dr Jain has made seminal contributions to earthquake engineering practice and education in India. He was instrumental in the development of several important seismic codes in India, and has trained thousands of professional engineers and college teachers in earthquake engineering through his continuing education programmes. He established the National Information Centre of Earthquake Engineering (NICEE) at IIT Kanpur and developed the National Programme on Earthquake Engineering Education (NPEEE), supported by the Government of India. He has served as consultant for several major projects, such as bridges and petrochemical pipeline, and has published more than 150 scholarly papers. His research interests include the study of damaging earthquakes, reinforced concrete buildings, bridges, and seismic codes.

Under Dr Jain's leadership, IITGN has introduced several innovations in curriculum development, interdisciplinarity, and student, faculty and institutional management. IITGN is one of India’s most globalised campuses; more than 40 percent of its undergraduate students and 75 percent of its PhD students receive study abroad or other international opportunities. The Institute ranks among the top 7 in India and the 601-800 band globally in the Times Higher Education World University Rankings 2021. Dr Jain led the development of IITGN's new campus, which has won several national awards and is the first campus in India to receive the 5-star GRIHA-LD rating.

Dr Jain served on the faculty of IIT Kanpur for 35 years from 1984-2019. He holds a Bachelor of Engineering from the University of Roorkee (1979), and Masters (1980) and Doctoral (1983) degrees from the California Institute of Technology, Pasadena. 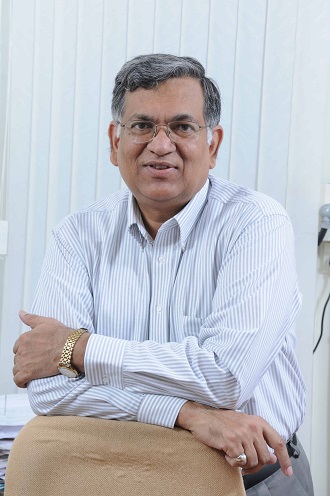